It has been two years since the release of TSB’s critically & fan acclaimed record “Turn of the Wheel” which came out at the onset of the Covid-19 pandemic, and was therefore never properly supported with live shows to promote it. April 29, 2022 will see the release of “Re-Turn of the Wheel,” a companion piece to the band’s previous album, featuring eight newly recorded tracks, plus an acoustic version of the title track, all recorded during the pandemic lockdown. Also included on the vinyl & CD editions will be “Make it Right,” a fan favorite from the digital & streaming versions of “Turn of the Wheel” that was left off the original vinyl version due to space limitations. Once again, recording took place at Vigo Street Studios, on the shores of Lake Michigan in Miller Beach, Indiana with Jim Winters (brother of TSB drummer Joe Winters) handling the production and mixing duties. “The band and I feel that TOTW is a very strong album for us, and wanted to find a way to keep the focus on it when touring resumed. So we thought, why not just add to it?” said Joe Winters. Recording began in early 2021, as the band tracked the songs separately in order to adhere to safety protocols, also a first for TSB, who are used to recording basic tracks live in a room while playing together. Additional recording took place at Cruise Control Studios in Fortville, IN (just outside of Indianapolis) with TSB guitarist Eric Saylors engineering his own guitar parts, along with the backing vocals for the project. Jeff Massey, lead vocalist / guitarist for TSB said, “This new collection of songs reflects the intensity of the current times, and the band’s never ending love for creating new music.” He added, “picking up right where we left off on the last record, it only made sense to make this a companion piece to TURN OF THE WHEEL.” Guesting on keyboards again for about half of the album is the band’s old friend Chris Grove, a longtime member of the Eddie Money band. “Re-Turn of the Wheel” will be The Steepwater Band’s eighth full length release, along with two official live albums, and a couple of EPS over the band’s 24 year career. The artwork for the album will be a variation on TOTW, serving as “Side C / Side D” to the original record - with the CD & streaming versions arriving this spring, and the vinyl LP later in the year, due to high vinyl demand causing delays for nearly all artists & labels making records at the moment. Mastering for the project again took place at the legendary Gateway Mastering Studios in Portland, Maine and was completed by Grammy award winning engineer Adam Ayan.

“Turn & Re-Turn of the Wheel” might signify the creative bookends to the beginning & ending of uncertain pandemic days that took The Steepwater Band off the road for the first time in nearly two decades, but more importantly, both records amplify the positive message that the music and spirit of TSB is alive and well in 2022. In celebration of the album’s release on the band’s own imprint Diamond Day Records, two CD Release Shows are planned - April 29th at Vegetable Buddies in South Bend, IN and April 30th at Martyrs’ in Chicago, IL. Extensive touring is also being planned in the States & Europe for the remainder of 2022 and all of 2023 in support of both albums. For pre-sale info, release show info and more, be sure to check www.steepwater.com for the latest updates…

- “It was not so long ago, down and out and feeling low, but the time has passed, now it’s alright…” – Jeff Massey, The Steepwater Band, 2022

03/09/20 ~
The Steepwater Band “Turn of the Wheel” Set for Release on April 24, 2020 and bundles coming!
TSB will be launching bundles this week for the new release! Stay tuned!!

02/18/20 ~
The Steepwater Band “Turn of the Wheel” Set for Release on April 24, 2020
When the Chicago winter finally breaks this year, The Steepwater Band will release their brand new album “Turn of the Wheel” on April 24, 2020, via the band’s own imprint, Diamond Day Records. The eleven-song set was recorded last year on the shores of Lake Michigan at the new Vigo Street Studios in Miller Beach, Indiana, marking the band’s return to work with producer/engineer Jim Winters (brother of TSB drummer Joe Winters), who recorded their fan-favorite 2006 release “Revelation Sunday.” For TSB, it’s their seventh full-length studio record and first recorded work since 2016’s “Shake Your Faith.” This also marks the first album to feature new bassist, Joe Bishop, rounding out the sound along with veteran guitarist Eric Saylors, and co-founding members Jeff Massey on lead vocals/guitars, and Joe Winters on drums. The songwriting on “Turn of the Wheel” is an eclectic, rootsy mix of musical contributions by all four bandmates, with Massey handling the lyrical content exclusively. Along for the ride, this time around are a few guest musicians - longtime Eddie Money keyboardist Chris Grove, percussion by the band’s old friend Freddy Gonzalez, and for the first time ever on a TSB record, a saxophone cameo by Terry “Sonny Lee” Tritt. "To my ears, this is the best Steepwater record to date," said Jeff Massey regarding the upcoming release." He added, "the new music displays the raw quality of the band's early efforts, combined with a confidence that could only come from many years of recording and touring." TSB drummer Joe Winters said, "I think this record says everything about where we are RIGHT NOW as a band, and getting to reconnect with my brother Jim in the studio sure was a lot of FUN!” The finishing touches for “Turn of the Wheel” were added by Grammy award-winning mastering engineer Adam Ayan at Gateway Mastering in Portland, Maine. Beginning April 24, the vinyl LP will be offered through a special online sale via the band’s website steepwater.com, while the CD / MP3 version will be distributed via CDBaby.com, with streaming versions on most platforms (Apple Music / Spotify / Rhapsody, etc.) As always, hard copy LPs & CDs will be available at all TSB performances world-wide. Pre-sale orders will begin in February via the band's website as well. After the album’s release, extensive touring is planned for the band in the States and Europe, so be sure to check TSB social media for new shows, pre-sale info, new music videos and more, all coming very soon! “Turn of the Wheel” Track List 1. Turn of the Wheel 2. Trance 3. Running From the Storm 4. In the Dust Behind 5. That’s Not the Way 6. Big Pictures 7. Please the Believer 8. Lost on You 9. Make it Right (*CD only bonus track) 10. Abandon Ship 11. The Peace You’re Looking For “Just a turn of the wheel, and a foot on the gas, into the now, driving out of the past...” For an interview, requests contact ~ steepwater.band@gmail.com

10/3/19 ~
It is with profound sadness that we announce the passing of our longtime manager, and dear friend Steven Sime, who died Wednesday, October 2, 2019, at Northwestern Memorial Hospital in Chicago. In September of 2018, Steven underwent a double lung transplant surgery and spent the last 13 months battling to recover. His invaluable contributions to TSB over the years will NEVER be forgotten. A consummate professional, the success of our organization, as well as the other artists he worked for, remained a priority to him, even in the late hours of his life. He was loved by so many in and around the music business. Our love and condolences go out to his family, his giant network of friends, all of the musicians, promoters, and agents he worked closely with on a daily basis, and EVERYONE who knew & loved him. Services and burial will be held privately, at the wishes of the family. Steven will be greatly missed, and always remembered, forever... 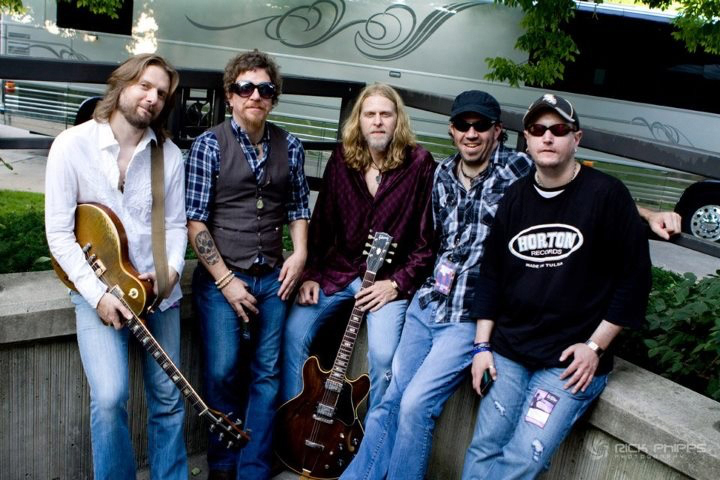 6/13/19 ~
Greetings & Salutations TSB Fans, Friends, & Family ~ Welcome to the BRAND NEW steepwater.com ~ your official home for all things TSB! BIG THANKS to everyone that attended the shows on our recently completed “Back To Work Tour” and supported us coming off hiatus with the new lineup of the band secured! With about 30 shows or so under his belt, new bassist Joe Bishop has settled in nicely, and the band is revitalized, optimistic, and ready to create new music. We have recently began work on a group of brand new songs for the first time in over four years, and are excited to be reunited with engineer Jim Winters (brother of TSB drummer Joe Winters) who co-produced the band’s 2006 record “Revelation Sunday,” at the new “Black Sand / Vigo Street Studios” on the shores of Lake Michigan in Miller Beach, Indiana. Stay tuned here for updates on the new tunes, and be sure to check the tour dates and Bandsintown, as new shows are always being added! Hope to see you all very soon, and as always, thanks for your support past, present & future...